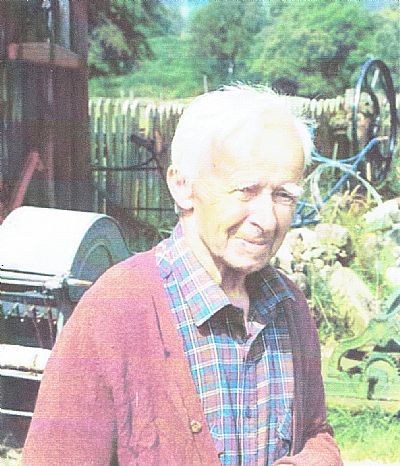 Some Stories collected as part of Evanton Oral History Project by AC on 29.11.1992

Father came to live there in 1907. Munros of Newmore.

1)      Black Cockerel. Buried in the clay floor under the bed of epileptics esp. Gairloch. ( notes that this also happened in Evanton. Note 1)

2)       William Munro's father, when a boy, had a bad gash on his face staunched by a 'bleeder', Mr Maclean, who was a crofter a Boath. No stitches were required. Willie's father, who was not superstitious, did not deride the power of the bleeders. (Note 2)

3)      First milk. To protect the cow and calf, the first milk was placed above the door along with a sprig of gean (sweet cherry). WM's parents would not have done this.

4)      Gleed-eyed Woman. The Evanton post woman, who was gleed-eyed, went to Culcairn Farm (Evanton) and admired a new calf, which promptly collapsed. The farmer thought it must be the fault of the gleed-eyed woman. His wife immediately placed her wedding rind along with a nail and a sixpence into a jug and sprinkled the water on the calf. The calf recovered. WM recognises that the calf had probably been drinking too quickly.

5)      Wise Woman. A wise woman in Evanton used to make notes on a string, the knots representing something. Around 1930 a ploughman who was working for WM wanted him to go to Evanton to get a string (to overcome some problem?). He did not. (Note 3)

6)      Danny Cronken and sister. Danny Cronken the bone-setter of Knockancurin had a sister who kept lots of herbs in the garden, according to Frank Maclennan. These would probably have been used for medicinal purposes.

An intelligent woman in Evanton, Ross said: A boy whose sister had an epileptic fit came to fetch a black cock that my mother had. The cock was buried where the epileptic fell. The girl is now a middle-aged woman and never had a recurrence of epilepsy since that day.

A minister in Ross writes: I mentioned to my mother-in-law the living burial of the black cock at Evanton. She said she had seen a girl seized with an epileptic fit on the second floor of a house. Immediately a hole was made through the floor at the spot where the girl fell, a second hole through the floor below, and a hole dug in the earth beneath. Then a black cock was procured and lowered through the two floors and buried alive in the pit below (Alex. Carmichael, Carmina Gadelica, p 383).

'Thanks so much for the information from William Munro. The Boath reference for the man who was a 'bleeder' is very interesting indeed, given that Alexander Carmichael's son-in-law William J Watson, later Professor of Celtic here at Edinburgh, was brought up for a time there by his uncle.' (DW Stewart, Univ Edinburgh 30.6.10 http://www.carmichaelwatson.lib.ed.ac.uk/)

'The string mentioned in note 5 must be a snaithlean, a piece of string blessed by the 'operator' usually used to protect animals from the evil eye - in this case I presume it was one of the ploughman's horses. It's all very interesting, especially how late these beliefs survived: thanks so much again for carrying out the interview.' (DW Stewart, Univ Edinburgh 30.6.10)